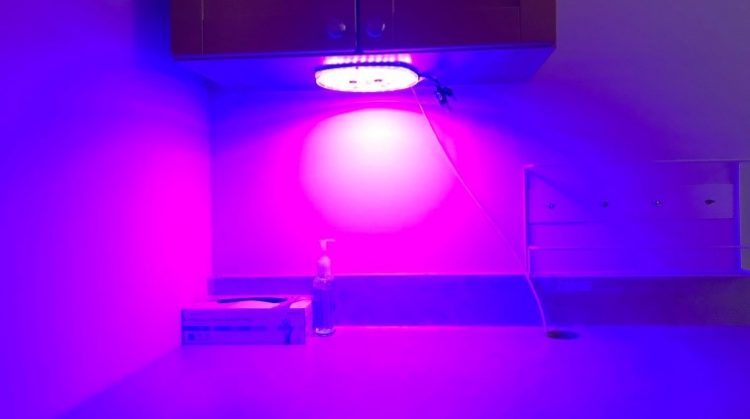 How Does Blue Light Kill Bacteria?

Staphylococcus aureus is a Gram-positive, round-shaped bacterium that is a member of the Firmicutes, and it is a usual member of the microbiota of the body, frequently found in the upper respiratory tract and on the skin.

Helicobacter pylori (H. pylori) is a type of bacteria. These germs can enter your body and live in your digestive tract. After many years, they can cause sores, called ulcers, in the lining of your stomach or the upper part of your small intestine. For some people, an infection can lead to stomach cancer.Dec 21, 2018

Staphylococcus epidermidis is a Gram-positive bacterium, and one of over 40 species belonging to the genus Staphylococcus. It is part of the normal human flora, typically the skin flora, and less commonly the mucosal flora. It is a facultative anaerobic bacteria.

Streptococcus pyogenes is a species of Gram-positive, aerotolerant bacterium in the genusStreptococcus. These bacteria are extracellular, and made up of non-motile and non-sporing cocci. It is clinically important for humans. It is an infrequent, but usually pathogenic, part of the skin microbiota.

Propionibacterium acnes is a gram-positive human skin commensal that prefers anaerobic growth conditions and is involved in the pathogenesis of acne (Kirschbaum and Kligman, 1963). Acne is one of the most common skin diseases, affecting more than 45 million individuals in the United States.

Porphyromonas gingivalis is a Gram-negative oral anaerobe that is involved in the pathogenesis of periodontitis, an inflammatory disease that destroys the tissues supporting the tooth, eventually leading to tooth loss.

ST8:USA300 is a strain of community-associated methicillin-resistant Staphylococcus aureus that has emerged as a particularly antibiotic resistant epidemic that is responsible for rapidly progressive, fatal diseases including necrotizing pneumonia, severe sepsis and necrotizing fasciitis

Pseudomonas aeruginosa is a gram-negative bacillus that is found throughout the environment and in 50% of the airways of hospitalized patients.

Enterococcus faecalis – formerly classified as part of the group D Streptococcus system – is a Gram-positive, commensal bacterium inhabiting the gastrointestinal tracts of humans and other mammals

Escherichia coli, also known as E. coli, is a Gram-negative, facultative anaerobic, rod-shaped, coliform bacterium of the genus Escherichia that is commonly found in the lower intestine of warm-blooded organisms

Acinetobacter baumannii is a typically short, almost round, rod-shaped (coccobacillus) Gram-negative bacterium. It can be an opportunistic pathogen in humans, affecting people with compromised immune systems, and is becoming increasingly important as a hospital-derived (nosocomial) infection.

Pseudomonas aeruginosa is a gram-negative bacillus that is found throughout the environment and in 50% of the airways of hospitalized patients.

Proteus vulgaris is a rod-shaped, nitrate-reducing, indole+ and catalase-positive, hydrogen sulfide-producing, Gram-negative bacterium that inhabits the intestinal tracts of humans and animals. It can be found in soil, water, and fecal matter.

By using a 405-nm superluminous diode light source, Enwemeka et al (Enwemeka et al., 2008) investigated the effect of blue light on two strains of methicillin-resistant S. aureus (MRSA): USA 300 strain of community-acquired MRSA and IS853 strain of hospital-acquired MRSA. Each strain was separately diluted to a cell count of 5×106 colony forming units (CFU)/mL in 0.9% normal saline. Then, the bacteria were volumetrically streaked onto round 35-mm petri plates with tryptic soy agar and exposed to blue light. The light aperture was placed at a standard distance of 1–2 mm perpendicularly above each open plate with the irradiance of 100 mW/cm2 at the lamp aperture. Maximum eradication of the USA-300 (92.1%) and the IS-853 colonies (93.5%) was achieved within 9.2 and 8.4 min of irradiation, respectively.

In another study carried out by the same group (Enwemeka et al., 2009), the authors reported the effect of a different wavelength of blue light (470 nm) on the same two strains of MRSA: USA 300 and IS-853. The irradiance at the lamp aperture was 30 mW/cm2 and the lamp was place at 1–2 mm perpendicularly above each open plate with bacterial culture. Both strains lost nearly 30% CFU with as little as 3 J/cm2 of light exposure. As much as 90.4% of the US-300 and the IS-853 colonies, respectively, were killed with an exposure of 55 J/cm2.

Maclean et al (Maclean et al., 2008a) screened the visible light spectrum by using a xenon broad white-light source with a selection of filters and found that blue light of wavelength between 400–420 nm was bactericidal to S. aureus, including MRSA. The maximum inactivation occurred at 405±5 nm. A 2.4-log10CFU reduction was achieved when the bacterial suspension (2 mL volume in each well of a 12-well micro-plate, giving a liquid depth of 7.2 mm) exposed to a light exposure of 23.5 J/cm2 at 405±5 nm.

As a result, in a later study, Maclean et al (Maclean et al., 2009) tested the bactericidal effect of 405-nm light from a LED array on selected medically important bacteria, including Gram-positive S. aureus, Staphylococcus epidermidis, Streptococcus pyogenes, Enterococcus faecalis, and Clostridium perfringens, and Gram-negative A. baumannii, P. aeruginosa, Escherichia coli, Proteus vulgaris, and Klebsiella pneumoniae. A 2-mL volume of bacterial suspension with a depth of 7 mm, stirred by a mini magnetic bar, was held within one well of a 12-well micro plate. The LED array was then placed on top of the well with bacterial suspension. The irradiance at the surface of the suspension was around 10 mW/cm2. The experimental arrangement was such that no build-up of heat occurred around the LED or was transmitted to the bacterial suspension. The results showed that both Gram-positive and Gram-negative species were successfully inactivated, with the general trend showing Gram-positive species to be more susceptible than Gram-negative bacteria (Fig. 1). Detailed investigation of the bactericidal effect of the blue-light on S. aureus suspensions, for a range of different cell densities of 103–109 CFU/mL, demonstrated that 405-nm LED array illumination could cause complete inactivation at high cell densities: inactivation levels corresponding to a 9-log10-unit reduction were achieved.

Blue light (405-nm) inactivation of medically important bacteria. (A) Gram-positive bacteria; (B) Gram-negative bacteria. Irradiance: 10 mW/cm2. (The graphs have been redrawn based on the data presented in reference (Maclean et al., 2009))

Lipovsky et al (Lipovsky et al., 2010) tested the efficacy of blue light in killing wound pathogenic bacteria S. aureus and E. coli. Light sources were LED arrays at 415 and 455 nm with the irradiance of 100 mW/cm2 at the surface of target. Bacteria were exposed to the blue light in two different cultures: suspension and culture on agar plate. The authors observed an increase in cell count when S. aureus was illuminated with 415 nm at a light exposure of 30 J/cm2. A maximal reduction in viability, 90%, was measured for S. aureus after illumination with 415 nm light at 120 J/cm2. Illumination at 455 nm was less effective for killing S. aureus. Only 50% reduction was obtained following an exposure of 120 J/cm2. E. coli was much more susceptible to blue light. An almost complete reduction occurred after an exposure of 30 J/cm2 at 415 nm, and a total reduction of between 98% and 99.9% was achieved following a light exposure of 60 J/cm2. Illumination with 455 nm resulted in dose-dependent cytotoxicity, with the highest reduction in cell count, of 90%, observed after an exposure of 120 J/cm2. Unlike S. aureus, neither 415 nm nor 455 nm enhanced proliferation of E. coli at any light exposure. The results of blue light illumination (415 or 455) on plates were similar to those obtained for suspensions of S. aureus or E. coli. 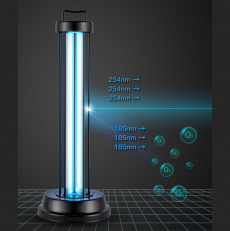